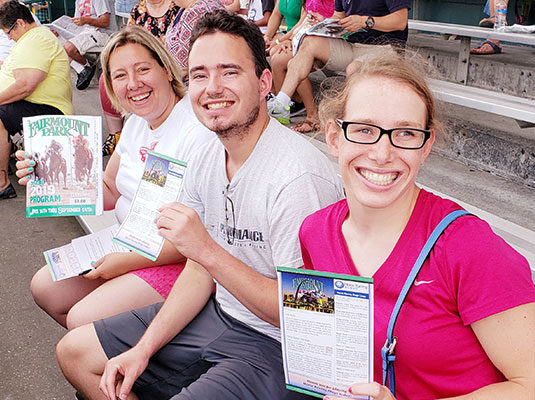 I feel like I am more confident, more willing to greet people, talk about different topics, ask questions and make small talk.

Michael joined us in 2015 and since then has achieved many of the goals he set for himself. When he graduated from high school, he was ready to try new things and get out in the community. Michael says, “During high school I was very shy. I felt kind of insecure about myself. I had some acquaintances and a couple of friends. When high school ended, I lost contact with the few people I was friends with; I mostly kept to myself.”

In 2015 Michael started looking for a job through the MERS MO Goodwill Industries Autism Employment Program (MMGI-AEP). While he was there, he learned about us when Jessie Hautly, Pathways’ Program Director, visited and introduced him to our programs. When Michael saw the posted social calendar at MERS/Goodwill, he became interested in what we could offer.

Michael sees a real difference since he started here. “Since I’ve been at [Pathways], I’ve become more outgoing and more willing to plan things, even things outside of Pathways events. I feel like I am more confident, more willing to greet people, talk about different topics, ask questions and make small talk. I also learned more about how to budget and now pre-plan how much I want to spend when I go out.”

He especially likes the Social Focus program where participants work with staff to plan their own social activities. “I planned my first small group going to the Butterfly House. I wanted to practice being more independent in planning and get to know certain people at Pathways better. I was anxious if everyone I invited would like what we were doing. I like that it’s up to me to invite people and that I can invite who I want. Sometimes, I try to invite people that I haven’t invited before so that they feel included and to get to know them better.”

Michael continues to grow his social network since he started planning his own social activities. “I think I’m more in touch with people. I’ll call or text to see how things have been. I have a lot more friends now because of planning small groups. Planning my own events makes me feel satisfied with myself that I’m able to be willing to get out and do something that involves inviting people under my own initiative. I really like trying some new things, too.”

Jamie Larson, one of our Program Managers, has seen real growth in Michael’s confidence and conversation skills as well. “I feel like Michael has dramatically improved his ability to have deeper, more meaningful conversations with peers by participating both in larger events and through coming up with his own ideas for small groups.”

Michael has gained confidence in being able to meet new people in the community on his own. “When I joined Pathways, I was going to events to try to get to know people and try to make those connections. I wanted to gain confidence to get together with people outside of Pathways and with small groups. I’m doing that now.”